Demand to buy a new home is ‘the weakest since April 2020’, Rics estate agents say, as inquiries fell 40% in August alone

Homebuyer inquiries fell nearly 40 percent in August according to estate agents at the Royal Institution of Chartered Surveyors, following a 26 percent drop seen in July.

It is the weakest buyer demand reported since April 2020 at the start of the coronavirus pandemic, and comes amid fears of a center in the housing market after years of sustained price growth.

The decline is across the board according to the Rics Residential Market Survey, with surveyors in most areas of the UK reporting a decline in inquiries from buyers.

Demand down: Inquiries from home buyers have dropped to levels not seen since the start of the pandemic, according to Rics real estate agents

London is one of the exceptions, as the demand for property in the capital remains stable.

At the same time, the number of homeowners listing their properties for sale has also declined, with agents reporting a 15 percent drop in new listings nationwide in August. Listings were down 6 percent in July.

As a result, the average number of homes on real estate agents’ books plunged to a new all-time low of just 34 homes during the latest survey period.

Property sales have now fallen for five straight months with a 22 percent decline in August, implying the downward trend is “accelerating,” Rics said.

Over the next twelve months, just under half (45 percent) of those surveyed anticipate a drop in sales, marking the lowest return for this series since its formation in 2012. 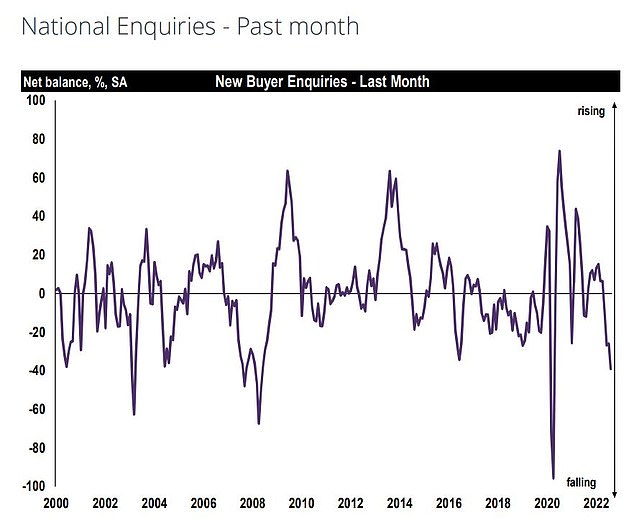 Demand cooling: Inquiries from new buyers plummeted 40% in August as agents warned of the start of a slowdown in the housing market 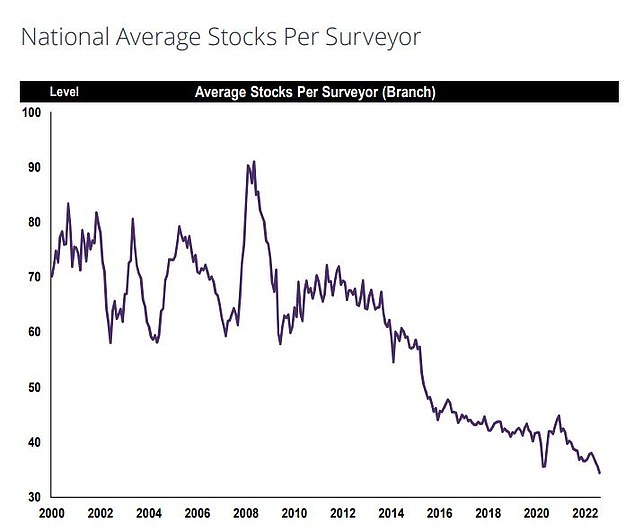 Shortage of supply: In August, the average number of homes on the books of real estate agencies fell to an all-time low of just 34

However, despite weakening conditions, 53 percent of agents said house prices continued to rise in August. However, traders predicted that prices would rise just 0.3 percent over the next 12 months.

Respondents from Northern Ireland, the North West, London and East Anglia in particular continue to highlight relatively strong house price growth in the near term.

There is some “sanity” on the market and not all homes sell above guidance.

James Watts of Robert Watts Estate Agents in Bradford said: ‘The market generally appears to have cooled, although August is an unreliable month due to the holidays.

“There are, however, more houses that have not sold after four weeks than in the last two years.”

Dorset-based Mark Lewis of Symonds & Sampson added: “Some properties continue to attract competitive interest, but there is a certain ‘sanity’ to the market and not all houses sell above guideline.”

In the rental market, the disparity between supply and demand continues. Half (50 percent) of those surveyed said they saw an increase in tenant demand, up from 43 percent in July, while new instructions from landlords fell 13 percent.

Rics said respondents continued to blame changes in the tax and regulatory environment for landlords as the reasons for the decline in supply.

Between 2017 and 2020, the government phased out the tax break on buy-to-let mortgages.

Previously, homeowners could offset all of their mortgage interest from their tax bills.

This meant that a landlord with mortgage interest payments of £400 a month on a property rented for £1,000 a month would only pay tax on £600 of that income.

But this system was superseded and now they only get a 20 percent tax credit, which is a blow to higher income earners who pay the 40 percent income tax.

Along with rising mortgage rates as a result of consecutive Bank of England base rate hikes, homeowners’ earnings have taken a hit.