The number of sites being developed for homes increased 15 percent from April to June of this year compared to the same period last year.

Figures from the Office for National Statistics show a significant increase in home construction starts in the second quarter of this year, with 51,730 homes under construction.

In addition, home construction starts increased 21 percent from the first to the second quarter.

But that came after a significant drop in construction during the pandemic’s main year of 2020 to 2021, when home construction plunged by a similar amount to the 2008 financial crisis that hit developers and the public alike. real-estate market.

The figures revealed that the number of completed homes rose 6 percent compared to April, May and June last year, to 44,940. This was also a 3 percent increase on the previous quarter.

However, the completion rate remains well below the UK Government’s target of building 300,000 homes each year. For that to happen, an average of 75,000 would need to be built each quarter.

Looking back, for the year 2020-21 as a whole, the net number of additional homes fell 11 percent from the previous year, in a pattern that the ONS said was similar to what happened during the financial crisis in 2008.

This figure represents the total number of new homes completed in a year, minus those that have been demolished.

The lack of housing in the UK is a factor driving the increase in house prices, along with low mortgage rates. Housing inflation remains high despite turbulent economic conditions and rising interest rates.

House prices rose 15.5 percent in July, according to the ONS, although experts say this high figure was a statistical quirk caused by the end of the stamp duty holiday a year earlier. Analysts expect house prices to start declining towards the end of the year as rapidly rising new mortgage rates bite. 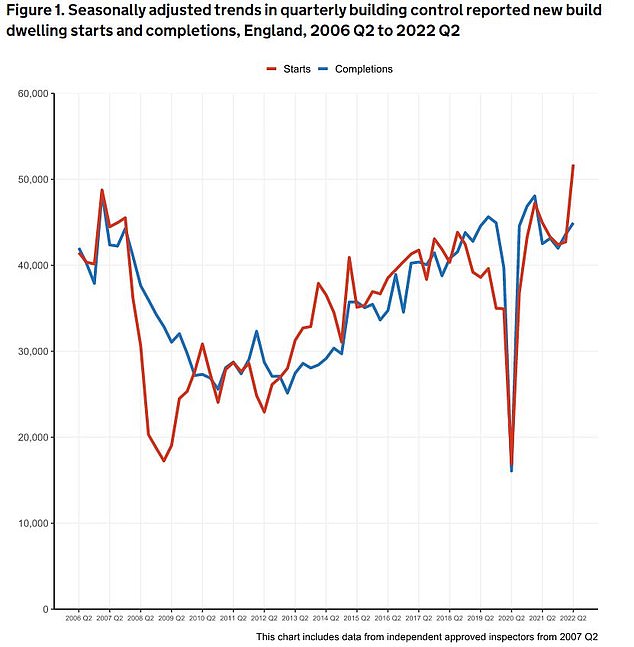 Rhys Schofield, managing director of mortgage broker Peak Money, said: “If you remove the numbers that look big on paper, the UK needs to build 340,000 new homes a year by 2031. The government’s target is 300,000 a year.”

‘These latest numbers are very understated, which means that house prices can only be pushed in one direction. With the lack of urgency around building homes, having a place to call home is becoming more and more out of reach for many people.’

Trends in home construction ‘similar to the financial crisis’

In 2020, there was a sharp drop in starts and finishes as a result of the Covid-19 restrictions introduced in the spring. After a strong rebound in the September 2020 quarter, starts and completions continued to increase through the March 2021 quarter.

The number of council properties in the country has been steadily increasing since 2013-14 according to official figures.

Matthew Spry, senior director at planning and development consultancy Lichfields, said: ‘The overall outlook is that it shows a reasonable level of new home supply, but with what is now a downward trend. And the worrying indicator as to what’s to come is that the annual flow of new planning permission has declined markedly and is now below the level at the height of the pandemic.

“Although the level of housing supply is almost better than it was immediately after the financial crisis, it is headed down when most people think it should increase towards the 300,000 number.”

Spry also warned that while the grading and reclamation bill has ‘good ideas’ for improving the planning system, it is unlikely to result in new houses until the end of the decade and local councils will be reluctant to do anything. before legislation introduces a new regime in a couple of years. 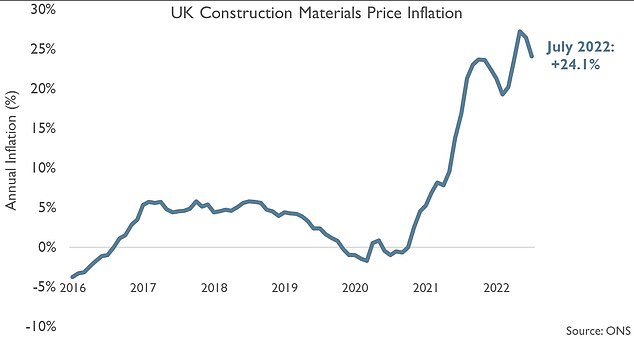 Construction cost: The price of construction materials in the UK fell slightly in July, but the figures show an increase of 24% compared to the same period last year.

And although prices have fallen since May and June of this year, they are still above October of last year, when the shortages were most acute.

“As we monitor the imbalance in the housing market, we are still seeing very high demand for housing, which continues to put pressure on prices.”