House prices in Britain could fall by as much as 10 percent ‘soon’, as rising interest rates send property markets crashing around the world, economists have warned.

According to Neil Shearing, chief economist at Capital Economics, a rise in borrowing costs and the anticipation of further increases in the coming months are already fueling “sharp recessions” in housing markets in advanced economies, including the UK.

House prices in the UK have seen double-digit growth over the last year, with the latest Halifax Index showing annual growth of 13 per cent in June, the highest annual increase since 2004.

This recent rise in prices “seems alarmingly similar” to what happened in the run-up to the global financial crisis, Shearing said, though he noted that a crisis on the scale of 2008 was “unlikely.”

It has been driven by historically low interest rates, unlike the flexible lending standards in the run-up to the 2008 financial crisis, according to Shearing.

But as central banks, including the Bank of England, steadily raise borrowing costs to fight inflation, they also remove ‘key support’ from property markets.

Higher mortgage rates are putting pressure on first-time homebuyers and those looking to remortgage, who have already seen home loan rates rise from 1.6% to 2% on average.

Average mortgage rates have risen 0.5 percentage points in the past month alone, according to Moneyfacts data.

Five-year fixed-rate offers are now averaging 3.89 percent, an increase of 0.52 percentage points from June and the highest interest since November 2014.

The pressure on home buyers will worsen as the Bank of England continues to raise the base rate, which currently stands at 1.25 percent after five increases since December last year.

This will eventually cause a correction in prices, with signs of this already happening here, according to the economist, who predicts that this time it will be faster than during the 2008 crash.

Measures of housing market activity, such as mortgage approvals and sales, have started to fall, the economist said, describing this as the “third stage” of a typical housing recession, which comes after a slowdown in market sentiment and buyer inquiries.

The fourth stage is when prices fall, with Shearing forecasting a 5-10 percent drop in the UK, with much larger drops of 20 percent in New Zealand and Canada, where “markets are particularly overvalued.” .

House prices in Australia are expected to fall by 15 percent and by 10-15 percent in Sweden, while in the US they are likely to fall by 5 percent. 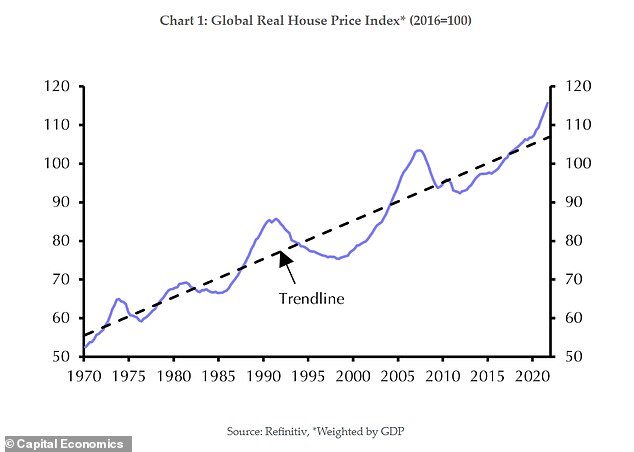 Capital Economics said the recent rise in prices “looks alarmingly similar” to what happened in the run-up to the global financial crisis.

The Royal Institution of Chartered Surveyors (RICS) recently reported that new inquiries from potential buyers fell in May for the first time in eight months.

The number of UK home sales rose 1.3% between April and May, according to HMRC’s latest property transaction data, but is 5.1% lower than a year ago.

Meanwhile, the latest figures from the Bank of England show that the number of mortgage approvals was just 0.1 per cent higher in May and almost a quarter lower than the previous year.

“The United States, the United Kingdom, Canada, Australia, New Zealand and Sweden are now in the third stage of the recession,” Shearing said.

“Also, compared to the mid-2000s, this is happening more quickly, with most indicators showing steeper initial declines.”

A cooling in the housing market is unlikely to deter the Bank of England from further raising interest rates, he added. 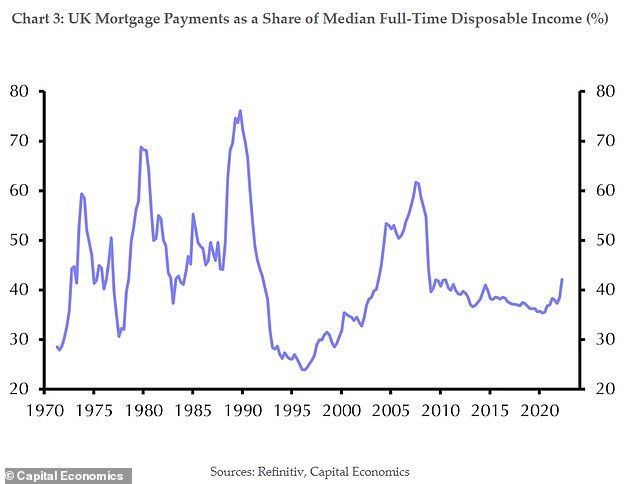 In the UK, mortgage payments as a percentage of median disposable income are still well below levels seen in the mid-2000s and early 1990s property bubble, economists said.

However, he believes that both homebuyers and banks are better equipped to weather a recession than they were in 2008.

“In the UK, low borrowing costs mean that despite rising prices, mortgage payments as a share of median disposable income are still well below the levels seen in the mid-2000s and early 1990s,” Shearing said. .

However, he added: “A crisis on the scale of 2008 is unlikely. However, a housing downturn will cause pain for developers and the construction industry, and this may spill over into problems in the non-bank financial sector.

“Recessions have a way of uncovering vulnerabilities in areas that are hard to anticipate.”

He expects the “boom to bust” shift in housing to cut between 0.5% and 2% of gross domestic product in the UK, as well as the US, Canada, Australia and New Zealand over the course of the next two years.